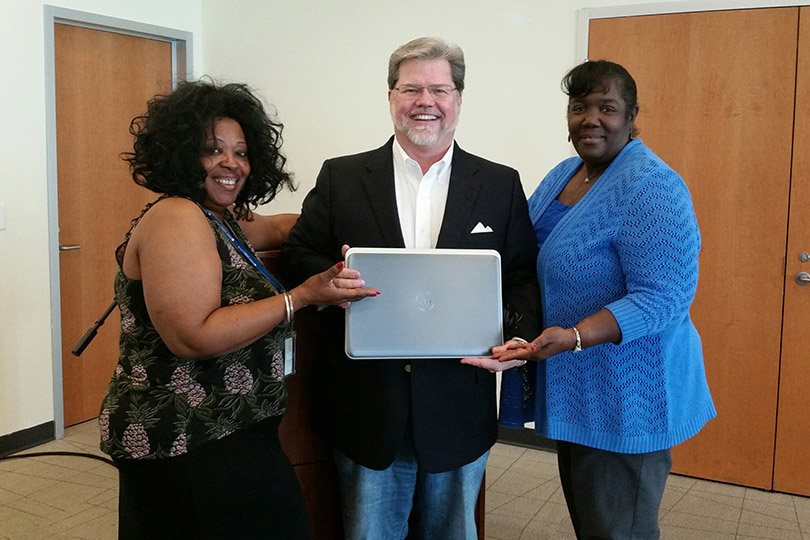 Peter Shaw has been giving to Tidewater Community College since 1987, when, as assistant to the president, he helped oversee the Educational Foundation as it raised its first million dollars.

Now a professor of business administration and management, Peter has continued to give back over the last thirty years – always using payroll deduction to contribute toward the unrestricted TCC fund and then later to the Norfolk Campus unrestricted fund.

But he’s passionate about supporting causes across the College.

When the former Norfolk Campus Women’s Center Food Pantry was empty, he had a Farm Fresh order at their door later that day. When he won a refurbished laptop in a Norfolk Campus Moss Scholarship fundraising raffle last year, he immediately donated the computer to the Women’s Center for a student in need.

“My mother was a single parent raising three kids on her own. I saw her working two jobs to support us. When someone puts out the call for a cause like the Women’s Center I want to respond,” he said.

Peter actually got his start on the original Portsmouth Campus, where he earned his Associate of Science in Business Administration in 1976 before he went on to earn his bachelor’s in business administration from Old Dominion University in 1978 and later an MBA from the College of William & Mary in 1982.

“Having been a TCC student, I get what the students are going through. TCC serves as a portal. My education took me from TCC to ODU to William and Mary to the Virginia state legislature to the Attorney General’s Office to where I am now. I had to start somewhere.”

Community-minded, he serves on the boards of the Norfolk Sister Cities Association; College of William & Mary South Hampton Roads Chapter; and is a former Future of Hampton Roads Board member. “Donating is an investment,” Peter said. “You can see the payoff in the scholarships, the students – the money is going to work instead of just sitting in a fund.”